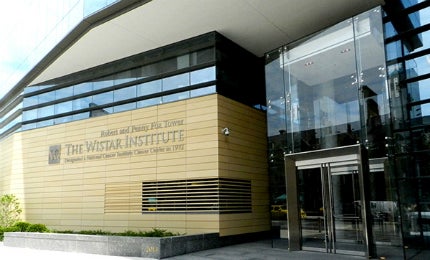 The Wistar Institute is the first biomedical research institute in the US and Philadelphia’s first NCI-designated cancer centre. It opened a newly expanded biomedical research building named Robert and Penny Fox tower in September 2014. The building is named in honour of Robert A Fox, a member of Wistar’s Board of Trustees for 40 years and his wife Penny Fox, who raised more than $150,000 for the ‘Building Wistar, Changing the World’ campaign.

The Robert and Penny Fox tower is located on Spruce Street in the University City of Philadelphia. It connects the entire Wistar Institute’s campus by linking the original facility built in 1894 and the newly renovated cancer research building, built in 1975.

Ground breaking for the construction of the research building was held in September 2011 and construction was completed in 2014.

The research building has seven floors with a total floor space of 89,700ft² and five floors are used exclusively for 15 laboratories. The floors are flexibly built with open floor plans, which can be easily configured to meet changing research needs. Each lab can accommodate up to four principal investigators and other staff, and is equipped with advanced apparatus and facilities.

"The project created 380 construction jobs and is expected to create 100 new research and administrative jobs."

The expansion aimed to upgrade the old building with new, modernised infrastructure and to make space for new research laboratories for researchers to carry out collaborative research in cancer, genetics and vaccine development.

The project created 380 construction jobs and is expected to create 100 new research and administrative jobs at the Wistar Institute.The expansion also included the construction of a new 22,000ft² vivarium, which is double the capacity of the previous one, with 7,000 cages.

A new public entrance has been created to the Wistar Institute on Spruce Street. A new 200-seat auditorium named Sarah and Matthew Caplan Auditorium was also constructed to host scientific symposia and public events.

Visitors to the auditorium pass through a new sun-lit atrium and the building hosts public spaces, enhancing the institute’s accessibility to the community.

Financing for the construction of Robert and Penny Fox Tower

The total investment for the construction of the Robert and Penny Fox tower was approximately $100m. The Commonwealth of Pennsylvania funded an $18m grant under the Redevelopment Assistance Capital Program and a loan of $55m was provided by the Citizens Bank. The ‘Building Wistar, Changing the World’ campaign raised $35m towards the construction of the project.

The biomedical research building was designed by Ballinger, an architectural firm based in Philadelphia. The scope of work included providing master planning and conceptual design for the project. L F Driscoll was appointed as the construction manager.