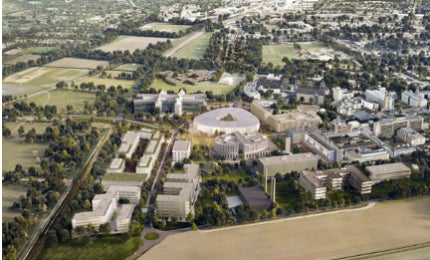 The project is part of the company’s strategic move to establish global R&D centres in the UK, the US and Sweden, to improve its pipeline productivity and biopharmaceutical innovation.

AstraZeneca investing approximately £330m ($500m) to build the facility, which is expected to employ approximately 2,000 employees.

The project gained planning permission from the Cambridge City Council in February 2015, following which the initial construction works began.

Construction of the facility, which will be AstraZeneca’s new global corporate headquarters, is expected to be completed by the end of 2017.

The facility was commissioned to produce the active pharmaceutical ingredient (API) rosuvastatin calcium for the worldwide supply of the once-a-day dyslipidaemia treatment Crestor.

The new facility on the CBC will occupy approximately 11 acres and benefit from the central Cambridge location and strong infrastructure links. The project includes the construction of a global R&D centre, an R&D enabling building and an energy centre.

Features of the global R&D centre will include high-tech labs with glass walls to enhance visibility, a number of open spaces and pathways to encourage collaboration within the company and the CBC campus.

The R&D enabling building will host operations to support AstraZeneca’s scientific work, including regulatory affairs and commercial units. The energy centre will be equipped with power generators, heating and cooling systems, IT and other telecommunications systems.

AstraZeneca’s small molecule and biologics R&D activities and protein engineering capabilities carried out at its MedImmune biologics division will be consolidated in the new facility. Scientists from AstraZeneca and MedImmune will work together to advance science in core therapeutic areas.

The new site will become the company’s biggest centre for oncology research. It will also conduct research on respiratory, inflammation and autoimmune diseases, cardiovascular and metabolic diseases, as well as conditions of the central nervous system.

The centre will also accommodate a number of pre-clinical research capabilities of the company. Other global functions will join the R&D teams at Cambridge upon completion of the building.

“AstraZeneca is investing approximately £330m ($500m) to build the facility, which is expected to employ approximately 2,000 highly skilled employees.”

AstraZeneca unveiled designs for the proposed new global R&D centre and corporate headquarters in July 2014. The shape of the new building is inspired by historical colleges in central Cambridge, which are typically designed with less height than traditional colleges and includes enclosed central courtyards.

The entire building will be constructed in a single loop to provide short connections. It will feature modern and innovative workspaces to ensure collaborative working.

A proposed two-storey disc structure of a unique oval shape creates an uninterrupted protected walk along the building. The disc will have laboratories and other amenities with a porous ground floor, and provides a spatial feel by framing a central courtyard.

A courtyard will be open to the public and feature three main entrances to the building, while the centre of the courtyard will have large trees and green lawn providing places for recreation and informal meetings.

The building’s internal design elevates visible science in a synergetic environment. Laboratories are separated from work and other spaces by semi-transparent partitions.

The first and second levels of the building will have a ring area overlooking the central courtyard, leaving a large number of spaces and arrangements, while the roof will bring natural light into deep floor plates.

The next phases include the development of a series of buildings on the south plot with an enclosed park, similar to the courtyard on the north plot. Consistency in design throughout the north and south plots will unify all buildings.

The concrete frame of the R&D centre building was constructed by April 2017 and installation of the roof and external glass cladding, as well as the internal fit out are anticipated to be completed in the second half of 2017.

AstraZeneca is obtaining Building Research Establishment Environmental Assessment Methodology (BREEAM) Excellent status for the proposed site. The site will feature labs that adopt best practices in low-energy design and the largest ground source heat pump in Europe, while the majority of the buildings on the site will have green roofs.

AstraZeneca selected Swiss architect firm Herzog & de Meuron Basel to design the new facility in November 2013. Skanska won a contract for the construction management of the project in February 2015.

Catalent Biologics’ manufacturing facility in Anagni, Italy will serve as the launch facility for the large-scale production and supply of…