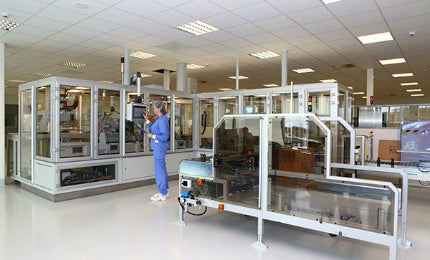 A new insulin formulation and filling facility at Grabtsevo Industrial Park in the Kaluga region of Russia was inaugurated by Novo Nordisk in April 2015.

The facility will produce modern insulin products, including Penfill cartridges and FlexPen prefilled insulin injection pens for the treatment of diabetes in the Russian market. It is equipped with sophisticated technology, research facilities and cleanrooms.

It will meet the demand for modern insulin for more than 200,000 Russian patients and ensures Novo Nordisk produces insulin of the highest standards to reach more than 467,000 people a day.

"The facility will produce modern insulin products, including Penfill cartridges and FlexPen prefilled insulin injection pens for the treatment of diabetes in the Russian market."

The insulin formulation and filling facility at Grabtsevo technopark has a total floor space of 8,700m². It was designed under the European and Russian good manufacturing practices (GMP) standards, as well as environment and energy-efficiency requirements.

Novo Nordisk constructed the high-tech complex of manufacturing and infrastructure facilities at Grabtsevo technopark in partnership with Kaluga Pharmaceutical Cluster with an investment of $100m.

The investment contributes to Russia’s Strategy Pharma 2020 programme, which is aimed at boosting the pharmaceutical industry by improving its production capacity.

The plant will also be used for developing key regional programmes such as a centre for professional training for the pharmaceutical industry. It currently employs 150 people and is expected to offer more jobs in the near future.

Construction of the insulin formulation and filling facility

The government of the Kaluga region and Novo Nordisk signed a co-operation agreement for the construction of the new insulin production facility in April 2010.

The construction began with the ground breaking ceremony held in April 2012 and took approximately three years to complete. The state-of-the-art facility was officially opened in April 2015.

Inhaleable insulin offers an entirely new approach to the treatment of type one and type two diabetes by improving therapy.

The project construction team included specialists from Denmark, the UK, US and Russia.

The building was constructed using energy efficient methods that are in compliance with environmental targets, including CO2 emissions, water consumption and use of energy.

Novo Nordisk is a global healthcare company headquartered in Denmark. It has more than 90 years of experience in producing innovative diabetic care products.

It is also engaged in the development of products and treatments for haemophilia care, growth hormone therapy and hormone replacement therapy.

The company employs approximately 41,500 people in 75 countries, and sells products in more than 180 countries.