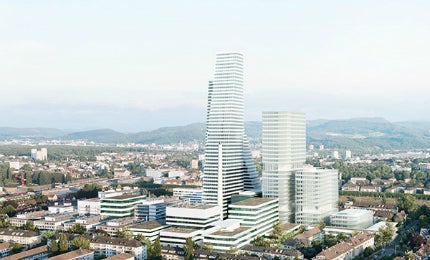 Roche, the world’s fourth biggest pharmaceutical company of 2014, announced its investment plans on a major infrastructure development project at its Basel site in Switzerland in October 2014.

The development plan will be executed over the next ten years and involves an investment of CHF3bn ($3.1bn). It includes the construction of a new research and development centre and a high-rise office building, as well as renovating the existing infrastructure at the site.

The facility will be used for producing pharmaceutical formulations and also manufacturing samples for clinical trials.

The Basel site is Roche’s corporate headquarters and one of its biggest pharmaceutical research and production centres, employing 9,400 people from more than 90 countries. The site has been operated by Roche for more than 115 years and has contributed to major medical breakthroughs in the company’s history.

The infrastructure and facilities at the site were mostly built in the early and mid-19th century and are no-longer found suitable for the current requirements. A large number of employees are working in rented properties located in different parts of the city.

With the current development plan, the entire workforce at the Basel site will be brought under one roof with modern facilities and equipment, providing them with an attractive work environment. Approximately 3,000 employees working in 13 different branch offices in Basel will be brought together for effective communication and collaboration.

"The development plan will be executed over the next ten years and involves an investment of CHF3bn ($3.1bn)."

The massive expansion project involves four main components including the construction of a new research and development centre and a state-of-the-art office building, infrastructure upgrade, and renovation of the old office building.

A new research and development centre will consist of four integrated office laboratory buildings of different heights including 16m, 28m, 72m and 132m. It will also have 950 modular office workstations and 950 ultra-modern laboratory workstations with centralised research infrastructure and automated screening systems, constructed on-site. The estimated investment for the research centre including the necessary infrastructure is $1.2bn. Construction of the research centre is slated to begin in 2017 and it will be completed between 2021 and 2022.

An in vivo research facility housing 70 multi-purpose rooms for laboratories and animal husbandry in a 24m tall six-storey building, scheduled for opening in 2018, is also being built on the site. The estimated investment is $240m.

A 50-storey and 205m tall high-rise new office building providing space for up to 1,700 workplaces will be built with an estimated investment of $575m. The new office tower, dubbed Building Two, expected to be ready for occupation by 2021, will be the tallest building in Switzerland and bring Roche’s entire workforce from across Basel under one roof. Another high-rise (178m tall) office tower called Building One is scheduled for completion in 2015.

An investment of $727m was allocated for upgrading the existing buildings and development of new infrastructure. The logistics building on the site will be upgraded with an investment of $78m to meet the latest standards for energy consumption, safety, good manufacturing practice (GMP) guidelines and other requirements. Other infrastructure projects include the addition of a workshop, fire service and medical service facilities in the new buildings on the site, as well as renovation of parking spaces at existing buildings.

Salvisberg Building, the group executive building built on the site in 1937, will be completely renovated with an estimated investment of $88m to bring it into compliance with modern energy efficiency standards and building infrastructure requirements. Renovation works, scheduled to begin in 2016, will preserve the appearance of the historic building, while protecting it from earthquakes and fire.