The Jackson Laboratory, The State of Connecticut 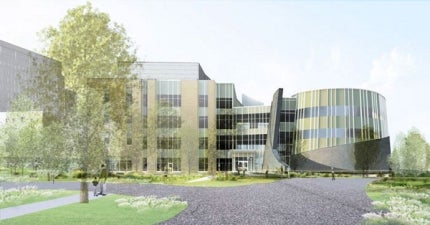 The Jackson Laboratory (JAX), a non-profit mammalian genetics research organisation based in the US, officially opened the new Jackson Laboratory for Genomic Medicine at the University of Connecticut Health Center (UCHC) campus in Farmington, in October 2014.

The new laboratory enables JAX to develop new medical treatments tailored to the genetic makeup of each patient. The lab also helps in making Connecticut a leader in the fast growing genomic medicine field. The project was sponsored by the Jackson Laboratory and the State of Connecticut.

The genomic facility created 842 jobs during the construction phase and is expected to create 661 research jobs, and about 6,200 spinoff and indirect jobs.

"The new laboratory enables JAX to develop new medical treatments tailored to the genetic makeup of each patient."

The new lab facility is a four-level building with a total floor space of 183,500ft2. It is constructed in a 17-acre site belonging to the UCHC campus. It will provide space for 300 biomedical researchers, technicians and support staff by 2020. It is equipped with sophisticated computing facilities and laboratories.

The facility brings together doctors, patients, scientists and industry members to indentify genetic problems and develop individualised treatments. The research is focused on treatments for conditions such as cancer, diabetes, heart disease and Alzheimer’s disease.

The scientists belonging to the Jackson Laboratory coordinate with UCHC and other institutions to develop new treatments. The collaboration with UCHC helps scientists in the new facility to achieve new patents and market products based on the discoveries by using biotech business incubator programmes.

The UCHC also helps the new research facility by providing support from its academic disciplines, such as medicine, nursing, dentistry and pharmacy, to carry out clinical trials and genomic research.

The new lab also collaborates with other researchers, hospitals and insurance companies based in Connecticut to engage them in the rapidly growing area of genomic medicine research.

The Jackson Laboratory for Genomic Medicine broke ground for construction in January 2013.

"The genomic facility created 842 jobs during the construction phase."

The new building features novel design aspects and has received LEED Gold designation from the U.S. Green Building Council by scoring 66 out of 68, for its compliance with environment-friendly sound design, construction and maintenance standards.

Gilbane was appointed as programme manager for the genomic medicine institute project in February 2012.

The architectural and engineering design for the new facility was provided by Centerbrook Architects, Tsoi / Kobus & Associates, BVH Integrated Services and BR+A.

In May 2012, Whiting-Turner Contracting was awarded with the construction management contract for the new genomics facility. The scope of the contract included supervising the site preparation, utilities development and overall building and site construction efforts.

Financing the construction and running of the genomic medicine laboratory

The financing for the construction of the genomic medicine facility, as well as the budget for research facilities for a period of over 20 years, was about $1.1bn.

The Jackson Laboratory contributed about $809m, which was funded through sources such as philanthropy, service income and federal research grants. The State of Connecticut provided about $291m, which included $192m for the construction and $99m for the research activity.